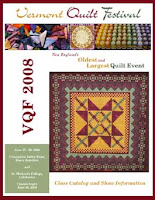 I attended the Vermont Quilt Show last weekend. I went on the Brown bus tour. Daryl was on the same trip although I didn’t see her all day! The place was packed! You were literally elbowing your way into and out of the vendors’ booths. I was happy to see some familiar faces—“the boys” from Woodstock were there. I learned that everyone refers to them as “the boys”: it’s not a Betty Smith invention. There were lots of vendors; a good assortment of wild and ethnic fabric, traditional fabric, embroidery, buttons, quilting machines, threads, magazines...a little something for everyone. My lady from Handloom Batiks was there so I bought myself another of the batik shirts I like so much (I have 4 now!). I also bought one for my mother-in-law who liked mine so much she wanted one just like it! I went to the show looking for some plain black and some southwestern fabric and I found both. Of course, I couldn’t limit my purchases to just that! As always, I spent way more than I should have. Oh well... The quilts in the show were a mixed bunch. Carolyn Olsen was a featured quilter. Her art quilts are indeed stunning! “Anna Byrd: a life in quilts” was another separate show. She is someone who has been a participant in the Vermont Quilt Show since its inception. Ms Byrd tried every new trend that came along so her display was a nice little collection of quilt styles. The antique quilts were amazing and provided the only examples of hand quilting to be seen in the whole show. I was particularly drawn to a quilt made from thousands, maybe millions of little ½“ squares. There was a special display of fairy tale quilts which were very nice. These collections were all in the North building along with bunches of vendors. The South building had the main quilt show plus special exhibits by the teachers and a special collection by kids. I found the teachers collection to be unimpressive and uninspiring for the most part. The kids’ collection was cute and some of the quilts were great but frankly I think that kids’ quilts belong in local shows, not national shows. Maybe instead of presenting kids’ quilts as a bunch of quilts hanging in a row it should be presented as a whole information package of how to teach kids’ to quilt. That would be more useful to me anyway. As for the body of the quilt show: most of the quilts were quilted very heavily with lots of stippling. In my opinion many of them looked over-quilted and the heavy quilting didn’t add to the design. In a few cases it was used properly and truly added to the beauty of the quilt. But too much is definitely not better. There was also a lot of thread painting. Again, thread painting can be used to great effect but just having it on your quilt doesn’t necessarily make your quilt better. There were quite a few quilts made with tiny pieces—log cabins with very thin logs, etc., or a quilt built from very small pieced blocks. There were some quilts with swarovski crystals, sometimes used effectively and other times just stuck on with no apparent rhyme or reason. A few quilts with buttons but other than buttons, crystals, threadplay and a few with embroidery, there was very little embellishment. I attended only one of the vendors’ workshops. It was on designing with ethnic fabric. It was very short but she did give some helpful nuggets of information. They had 1 quilt each from some of the teachers for the 2009 show including pieces by Jane Sassamon and Paula Nadelstern both of whom do stunning work. A good time was had by all as always. I came home and went straight to bed for a long night’s sleep.
Posted by Julie Stump at 1:06 PM 1 comment:

17 ladies attended this week. Wednesday was Agnes' birthday so Winnie brought in a cake and we all sang happy birthday. I brought in some card-making supplies from Katherine D. for Nancy and Alberta. They were quite excited by this new box of stuff to use in their classes and for their own cards. I pulled out our future raffle quilt and actually made the first bunch of quilting stitches. I didn't get much done in an hour but at least it's started. Marguerite is almost finished with her 4-patch posie. Marguerite just has the best hand quilting stitches! I also reorganized some of our ongoing projects--they have a habit of getting lost in the closet. We put together the blocks for a prayer quilt but didn't think some of the blocks fit in so 3 ladies volunteered to make another block. We should be able to put that one together soon. Then we still have a start on a mile-a-minute quilt top which we need to finish. Plus we have almost enough blocks for another prayer quilt. And finally, we need to lay out and count how many blocks have been made so far on our raffle quilt for 2009 or 10(?). It's so much quicker and so much more fun to piece them than it is to hand quilt them.
Posted by Julie Stump at 7:57 PM No comments: 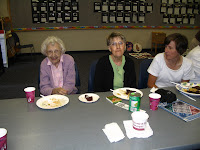 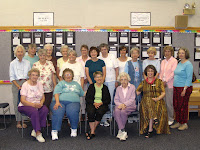 Today we had a very nice potluck lunch for Betsy Hoffman. She and her husband Bob are moving to New Jersey to be closer to her daughter. They've sold their house already and are in the final stages of preparation for moving. She has been bringing in things to give away for the past few weeks to clear out her house. She'll hopefully continue to come to Nimblefingers occasionally until they finally move. But just to make sure we had a chance to give her a proper goodbye we had the potluck today. It was also Sue Reilly's birthday so we sang happy birthday to her. The food was delicious (Fran's bringing in her recipe for ramen noodles and cabbage), the company great and we all had a good time (pictures still to come). Only a few dared to bring out their craft projects. Connie, Cathy and Edith all pulled out their knitting. Marguerite brought out her 4-patch posey to quilt. Louise brought in some pictures of her work and a particularly interesting sculpture she found in New Mexico. Deb brought in a Schlep bag she had made. We were all impressed so I copied the pattern. Maybe we can get Deb to teach us to make it at a later date. I brought in some craft supplies from Katherine Denegar. She's clearing out her house in preparation for a future move. I still have lots more in my car so I will be bringing it out slowly. So a nice time was had by all and the library staff have lots of good leftovers to enjoy!
Posted by Julie Stump at 3:13 PM No comments:

14 ladies attended today. Pam, Marguerite, Marjorie and I all basted our next raffle quilt. We still have some edges that haven't been basted but I think we can go ahead and start quilting anytime. Our chief hand-quilter Marguerite is already got the wheels spinning in her head to figure out the quilting design. Thanks to all for helping baste. That's one of the least pleasant parts of quiltmaking. Louise Claflin is back from Florida again. Welcome Louise! I hope that next week she'll bring in some pictures of her award winning quilts. She does such beautiful and meticulous work. Her work is always an inspiration to us all. Marguerite brought in pictures from her European cruise plus a few pictures of her cute grandson Nathan carrying the suitcase. Her favorite part of the trip was Tunis because it was so different. All of her pictures were beautiful but those from Tunis with all of the mosaic walls and fancy painted doors were particularly remarkable. Remember, next week we will be meeting at 12:30 and having a potluck lunch for Betsy Hoffman who is moving to New Jersey soon. Bring whatever you want...we'll take our chances!
Posted by Julie Stump at 10:13 AM No comments:

I missed Nimblefingers last week so I can't report what happened. But today I had a surprise: Louise Claflin came in to check out some books! She's back from Florida and may be here for the rest of the summer. It will be nice to have her join us again. Also, I was thinking that we ought to have a potluck lunch going-away-party for Betsey. She says June 17th would be a good day. All of you look at your calendars and we'll talk about it tomorrow.
Posted by Julie Stump at 1:59 PM No comments: