10 ladies showed up today. It was snowing outside so I was surprised that anyone came. I'm glad they did though because we had to take down the quilt show. I drafted Roger, Ethel's husband to come in and climb the ladder for me because Deb was late and I was afraid she wasn't going to make it. So Deb got to take it easy during the meeting. I put the tables in a small circle which was nice because we could all see each other and converse across the table. I passed out a small piece of fabric for people to take home and make a block. Daryl is having surgery so I thought we ought to make her a quilt. I also passed out photo release forms. Apparently I should have done this a long time ago since I put pictures of my ladies on the blog. Now I will have permission though so it will be legal.
Posted by Julie Stump at 3:03 PM No comments:

Today 8 ladies braved the weather to come to our group. With our small group I pulled out my suitcase which I still haven't unpacked from my trip to Tucson. I gave them a show-and-share of everything I bought. I was quite surprised because they all, except Deb, thought my Elvis fabric was pretty neat. Deb just never liked poor Elvis. It was fun to show off all my prizes but also a little embarrassing knowing that I really didn't need any of this stuff but bought it anyway. She who dies with the most fabric wins--isn't that the saying. I guess I'm in the competition. Deb told us the story of taking care of an elderly couple. The mom of this couple was the one who gave her the dreaded hexagon quilt pieces. This led to a discussion of alzheimer's and the difficulty of taking care of elderly relatives. Winnie came in late and reported that her doctor gave her some good news. We were glad to hear that. Anyway, a fun time was had by all.
Posted by Julie Stump at 3:51 PM No comments: 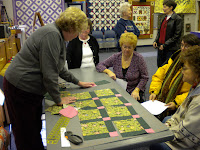 Yesterday we held our 2010 Nimblefingers Open House. About 50 people attended. It was another nice showing. Thank you to those of you in the Friday group and the Altamont group. We had a good 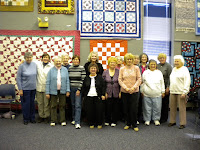 turnout from those members. I need to get the news to the Delmar Q.U.I.L.T. group sooner but we did have some visitors from that large group. As usual we had great desserts to offer, good punch, good conversation and 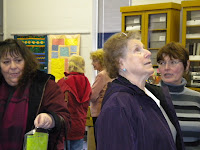 Kathy O. taught her Hidden 9-patch II pattern to quite a few people. I was told that last year after Kathy taught the Hidden 9-patch I block, that the Delmar Q.U.I.L.T. group made dozens of them for service projects. Jane Stearns, who saw it made at our show, went back and taught them. Maybe she'll do the same with this year's pattern. Cathy Y. found out that the baby for 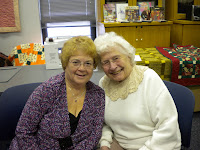 whom she was making a baby quilt was born early, in the middle of a blizzard, so she was eager to get it finished. Agnes helped her get it trimmed, then I sewed on the binding for her. It's a nice flannel quilt so it should keep this blizzard baby warm! Next week I plan to bring in the stuff I bought on my trip to Tucson including fabric, patterns and tools.
Posted by Julie Stump at 4:47 PM No comments: 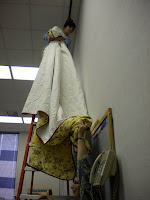 17 ladies attended yesterday. I wasn't here last week. I was off visiting 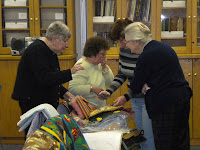 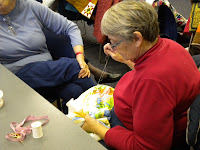 my sister in 60 degree Tucson where we attended the annual Tucson quilt show. I had a great trip and the quilt show was fantastic! I can't wait to tell you all about it in a couple of weeks when our activities die down a little. Today we hung the quilt show. It is always an exciting day: do we have enough quilts or too many? Is Deb still spry enough to do her monkey act on the top 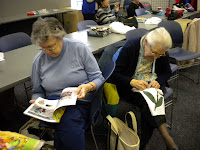 of the high ladder? But, as always, it looks great! We all deserve a pat on the back for our good work! Next week is our open house so I hope we get a 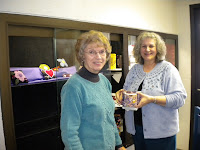 bunch of guests. Don't forget to bring some goodies! We have a bunch of pictures of our setting up so enjoy! 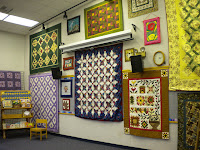 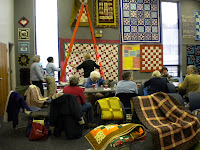 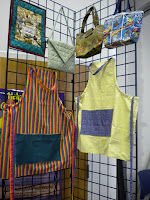