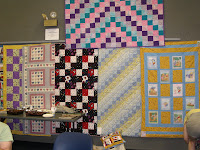 13 ladies attended yesterday, 2 of which were juniors. The juniors and I worked on another Camp Erin quilt. We finished tying it, got the binding ready, and trimmed it so next week we can put on the binding and be done with it. Linda Crannell had brought in a box of Betty Smith's supplies to share. Her family is busy planning the Betty Smith party which will probably be on Betty's birthday, 9/4. Pat O'R and Fran came back from their quilting week at Wiawaka 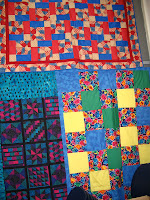 with pictures (Fran) and a finished wallhanging (Pat). They go every year and have a great time. Marguerite came in with her cute little grandson Nathan plus her finished colonial lady wallhanging and her 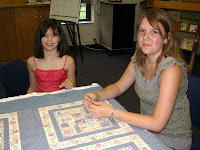 granddaughter Alexandra's finished mile-a-minute pillow she made as a gift for her mother's birthday. 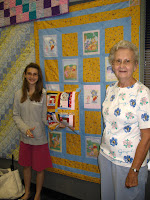 Today there were 15 ladies attending, 2 of which were Jr. Nimblefingers. Jackson finished sewing a quilt for the hospice kids, then we sandwiched it and started tying it. Pat O'R let us use her basting gun to baste the 3 layers together. She had brought it in to baste a pretty little quilt she had made. The basting gun is much quicker than using safety pins. I've never used one before so now I might just have to get one for myself. Betsey H. sent in a quilt from New Jersey. It was finished except for the tying. We made quick work of that and it now has a place on the wall. So far we have about 14 quilts finished. I think that's pretty good considering our regular attendance is only around 15. Winnie was working on a hidden 9-patch piece with some help from Agnes. Marguerite pulled out our raffle quilt and added some more quilting stitches. Gail S., the director who is just back from an ALA meeting in Chicago, reported that she met a woman from Pennsylvania who had heard of the Nimblefingers group. I guess we have quite a reputation! I'm eager to ask Gail more about this. There were a lot of conversations around the table. Jackson and I listened to a discussion of the Harry Potter books. Jackson says I need to finish reading the whole series: that the 7th book is the best. Then there was more discussion about Michael Jackson. I think the consensus is that when he's on the TV, everyone is changing the channel. We've heard enough about Michael Jackson already. Then there was talk about catching mice, bats and other critters. You never know what you'll hear around our Nimblefingers table!
Posted by Julie Stump at 4:19 PM No comments:

Today we had 12 ladies attending. Kristin Lauster, one of the original Nimblefingers, made a return appearance today. She plans to come back again so welcome back Kristin! She is working on a paper-pieceing (although she is using plastic) grandmother's flower garden. It will be beautiful when finished but my, what a project! Everyone said I had to look at Marie's crochet project but somehow I missed it. I hope she'll bring it back so I can finally see it. Cathy M. brought in a camp quilt ready to be tied so Cathy, Fran, Jackson (a junior Nimblefinger) and myself tied it. It's in very pretty pinks and greens and will be a beautiful girls quilt. Then Jackson and I pulled out a cheater cloth so that we can put together another camp quilt. The top should be finished next week so I'll have to be on the lookout for a backing. Ethel brought in the issue of the Enterprise which has a feature story on her daughter who is walking across the country to earn money for the homeless. She is very ambitious but I wish her well. We also got a visit from Linda Crannell who filled us in on her life without her beloved Nana (Betty Smith). We all miss Betty but for Linda it's been a real change of life. She seems to be doing just fine though. The family is busy planning a Betty party which they are having in lieu of a funeral, at Betty's request. We'll look forward to that.
Posted by Julie Stump at 4:20 PM 1 comment:

We had 13 ladies attending this week. It was a busy week. Cathy Y., Agnes and Marie were all knitting. Pat H. had Marie show her how to knit the Continental way. Cathy M. and I were sewing bindings on quilts. Pat O'R brought in some pieces to sew together for a quilt block but couldn't remember how they fit together. It was an interesting puzzle but even when we all put 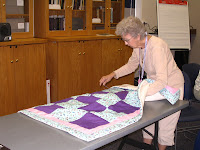 our heads together we couldn't figure it out. Linda O'C, Sue, Hope and Betty were all making rings out of garbage bags. They cut thin strips, braided them together and tied it around their fingers. A cute little project they can teach their grandkids. Pat H. was working on prayer quilts. Fran was appliquing leaves. 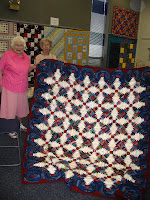 The highlight of the day was Marie's show and share. She brought in a pineapple quilt she had finished recently. It was exquisite as you can see in the picture. She also brought in some tatting that she has done. She is 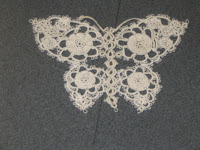 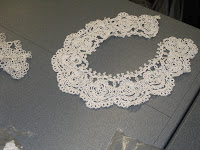 Posted by Julie Stump at 4:33 PM No comments: