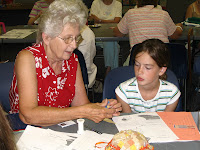 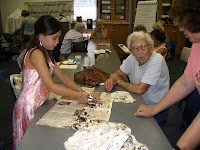 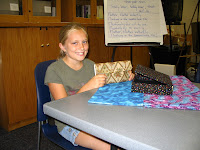 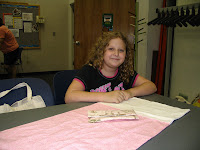 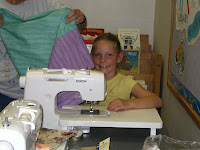 I just realized that I hadn't written in the blog this week. Yesterday was an eventful day, Nimblefingers followed in the evening by a Harry Potter birthday party. What fun! We had 17 people at Nimblefingers--only 4 jrs. It was nice being able to work with only 4 girls instead of 10--much less chaotic and even gave me a chance to breathe once in awhile. Of the 4 girls, 2, Alexandra Cunningham and Adele Reilly, both finished their clutch bags and received their "License to Drive." Hopefully, a bunch more will receive them next week. And among the sr. Nimblefingers, Deb Johnson brought in her fish pillow that goes with her fish quilt. The pillow was very nice. She has already given the quilt to her very appreciative mother. One more week of the jrs. then we'll be back to normal except that we will have the new sewing machines to use! The pictures are from top left: Jackson Lalor, Ann Bave and Joyce Laiosa; Adele Reilly and her creations; Alexandra Cunningham and her creations; and Laura Patak at the sewing machine.
Posted by Julie Stump at 9:57 AM